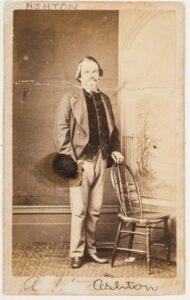 James Ashton (1861-1918) and Frederick Ashton (1866-1941), circus proprietors, were sons of James Henry Ashton and his second wife Elizabeth, née Critchley. Their father, whose real name may have been Wild, was reputedly a clog-dancer and circus performer from Colchester, Essex, England, who had arrived in Australia in the 1840s. After success as a ‘bold and fearless’ equestrian at Radford’s Amphitheatre, Hobart Town, in 1848-49 and at Port Phillip, he performed at John Malcolm’s Amphitheatre, Sydney, in September 1851 and later at J. S. Noble’s Olympic Circus. His first wife Mary died aged 19 at Maitland in 1852, and next year at Hanging Rock, near Tamworth, he married Elizabeth Critchley. By May 1854 he had formed Ashton’s Royal Olympic Circus and for the next thirty-five years he toured eastern Australia with his variously grandly titled circus. He was in South Australia in 1865, but his name became a household word especially in the country areas of New South Wales and in Queensland as far north as Rockhampton. He acquired a reputation for developing Australian talent: the Wirth family joined his troupe for a time, and he often featured Aboriginal performers such as the acrobatic rider Mungo Mungo.

James junior was born at Ipswich, Queensland, in 1861 and Frederick at Boorowa, New South Wales, on 28 September 1866. They and their brothers and sisters were soon being featured as clowns, riders, musicians, tumblers and high-wire performers in what was, during the mid-1870s, one of Australia’s largest travelling circuses, with a splendid brass band, about 40 horses, 12 vehicles and a tent said to be capable of seating 800 people. Advertisements in 1875 featured ‘Master James Ashton … the most sensational gymnast of the present day, actually standing on his head upon the flying steed’, and ‘ballet-dancing on the tight-rope’. In 1884 at Armidale, New South Wales, James married Elizabeth Ryan, and at Walgett in 1887 Frederick married her sister Ellen.

After their father died at Gladstone, Queensland, on 17 January 1889, James carried on the circus, sometimes in partnership with Frederick. While other circuses dominated in Sydney in the 1890s Ashtons’ continued to tour the bush towns of New South Wales and Queensland. In 1904-05 James was engaged with the Fitzgerald Brothers’ Circus, and with it toured New Zealand. By December 1905 he had re-formed his own troupe and in 1906-07 was in partnership with Walter St Leon. In 1909 James combined with one Stillman in a circus and buck-jumping show, and in 1913 his troupe featured the ‘Flying Colleanos’, of whom Con was later to be a tight-rope performer of international fame. While travelling with Sole’s circus James, aged 57, drowned in the Macquarie River at Dubbo, New South Wales, on 9 May 1918 and was buried in the Roman Catholic cemetery. He was survived by his wife and nine children, of whom most became circus and vaudeville performers.

After World War I Frederick, known as ‘Flash Fred’, a fine circus bandsman, small, dark and an immaculate dresser, was sole proprietor, and continued to entertain in the outback. He died on 17 February 1941 at Randwick, survived by his wife and ten children; he was buried in the Catholic section of Rookwood cemetery. His descendants still carry on the family circus.

This article was first published in hardcopy in Australian Dictionary of Biography, Volume 7, (MUP), 1979