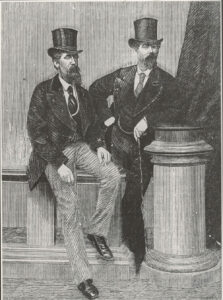 Henry Burton (1823-1900), circus proprietor, was born in Lincolnshire, England, son of John Burton and his wife Jane, née Blythe. After training as ringmaster with the circus of James Cook which toured Scotland and the Border counties, he arrived with his wife on 23 December 1849 at Adelaide in the Constant. Finding that audiences were larger in Sydney, he and three London associates formed a vocal quartette, the Blythe Waterland Minstrels, which opened at the Royal Hotel Hall, Sydney, in January 1850. With a tambourine man and an accordion player, they introduced Negro spirituals and had seasons in Melbourne, Launceston and Hobart Town, all under vice-regal patronage. Returning to Sydney in September as the Ethiopian Serenaders, they toured Parramatta, Liverpool and other towns as far as Goulburn. In November Burton dropped ‘his Ethiopian nomme de guerre’, Blythe Waterland, and opened a riding school at the Sir Joseph Banks Hotel, Botany Bay. The ‘zoological and botanical gardens’ of this hotel were noted for their menagerie and on Boxing Day Burton opened his first circus, a ‘Grand Equestrian Fête … à la Vauxhall, of the most recherché character’, in an amphitheatre alleged to seat 2000. With a ‘graceful and talented equestrienne’ from London, local riders and clowns and a stable of Maitland-bred ponies and horses, owned and trained by Burton, the act attracted many visitors. The rival Circus Royal at the Adelphi Hotel in York Street had become so stale that the owner, John Malcolm, contracted with Burton for evening appearances from December.

In mid-February 1851 Burton opened a touring season with three performances a week at Parramatta. Styled ‘The New Equestrian Circus’, it featured Burton as a comic hero in ‘Billy Button’s Ride to Brentford’. When Malcolm formed another rival circus, Burton introduced a new programme for his ‘Olympic Circus and Modern Arena of Acts’ in March. In April he toured Windsor and the Hawkesbury, returning to Botany for an Easter season under the patronage of Governor Sir Charles FitzRoy. When the discovery of gold robbed him of an audience, he went to Mudgee where he heard of a rush to the Turon River. He played twice a week at Sofala and Bathurst for six months and then toured the Victorian diggings. Later he was acclaimed ‘the father of amusements on our early goldfields’.

After the gold rushes the company toured from Adelaide to Hobart, Melbourne, Sydney, Newcastle and north to Rockhampton. Mostly they travelled overland and their arrival at a country town would herald a week’s picnic excursion from near-by stations. They were often held up by bushrangers; once near Queanbeyan they were released after the ladies in spangles gave an equestrian display; and on the Lachlan they were mistaken for the gold escort but were allowed through, although their takings equalled in value the mail bag in the coach.

In the 1850s circuses and travelling menageries were the liveliest form of public entertainment. Burton concentrated on equestrian feats rather than theatrical displays and was credited with introducing the hippodrome. In the next decades he knew such celebrities as Lola Montez, the Tichborne claimant (Arthur Orton) and Adam Lindsay Gordon, and for a time ran the Cremorne Gardens in Melbourne with George Coppin. After his first wife died Burton married an Irish girl, Fanny Hanly, at Brighton, Victoria, on 7 May 1863. He then bought Redbank, a run on the Murray River, where his family grew up and where he wintered, bred and trained his horses. A widower, he married Isabel Janet Sutherland on 3 February 1880 in Sydney and Elizabeth Buckland on 7 October 1890 at Toowong, Brisbane. He lost his accumulated wealth in an unsuccessful tour in 1881-82 and died in obscurity at the Dramatic Home, Fitzroy, Melbourne, on 9 March 1900. He was survived by a son and daughter of his first marriage, and by the daughter of his second.

This article was first published in hardcopy in Australian Dictionary of Biography, Volume 3, (MUP), 1969