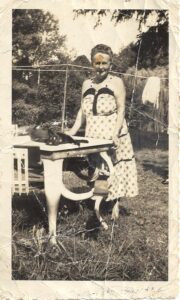 Neredah Daisy St Leon Honey (1879-1960), circus artiste, was born on 5 January 1879 at Carlton, Melbourne, eldest child of native-born parents Frederick Augustus Jones, circus performer, and his wife Margaret, née Leyden. Brought into the family circus, ‘Baby Daisy’ (aged 2) appeared with her father ‘Gus St Leon’ in his carrying act. She trained as an equestrienne and became ‘everybody’s favourite in her great firehoop act’. After settling (1896-98) at Tamworth, the family returned to circus life. Billed as ‘Mademoiselle Neredah Leon, the hurricane hurdle rider’, Daisy was the star equestrienne in Fitzgerald Bros’ Circus in 1899-1901.

The St Leons toured the United States of America with Ringling Bros in 1902-03 and then Mexico with Trevino’s Circus. At Pahuca on 10 February 1904 Daisy married Alfred George Honey (d.1970), a London-born gymnast. Following adventures in Central America with its own circus, the family returned to the U.S.A. and worked the Pantages and Orpheum vaudeville circuits. Alfred was partnered by Frank Cherry; Daisy’s brothers and ‘Mo’ Aarons had an acrobatic act.

The two troupes, ‘Honey and Cherry’ and ‘The 5 St. Leons’, arrived in Sydney in December 1908 and took vaudeville engagements with Harry Rickards. On 19 April 1909 ‘Gus St Leon’s Great United Circus’ opened under canvas at Liverpool. With 18 wagons and 40 horses, the Great United was one of Australia’s leading provincial circuses. The Honeys were performers and equal partners. By 1917 Golda, their first child, had a solo, slack-wire act; her three sisters and three brothers became acrobats, and eventually perfected a spectacular, ‘three high’ teeterboard act. The Honeys performed in New Zealand in 1920-21 and toured Australia for the last time in 1926 with Wirth Bros Circus before sailing for the U.S.A.

They initially appeared in American circus, then settled into regular vaudeville engagements. Enhanced with dancing and comedy routines, the Honeys’ acrobatic turn continued until World War II. Daisy and Alfred acquired a family home at Wyckoff, New Jersey. Golda’s career ended when she fell from the wire in 1934. Having served in the United States Army, ‘The Honey Brothers’ had a popular nightclub act and appeared in early American television programmes. By the late 1950s they were operating a party-boat on the south coast of California; their sister Florence (‘Coochie’) had her own troupe of all-female acrobats in 1963.

Through changing fortunes, Daisy dominated her family. Five ft 3 ins (160 cm) tall and rather stocky in build, with hazel eyes and dark brown hair, she possessed a ‘crackly’ personality, a sharp sense of humour and a ‘deep, hearty laugh’. She liked wearing hats or turbans. While accompanying her children on endless circuits of vaudeville theatres and county fairs, she wrote light verse. Her letters were chatty and mostly ‘upbeat’, even when things were not going well. In the 1950s Daisy and Alfred retired to southern California. Survived by her husband and children, she died on 8 June 1960 at Oxnard and was buried in the Ivy Lawn cemetery.

This article was first published in hardcopy in Australian Dictionary of Biography, Volume 14, (MUP), 1996