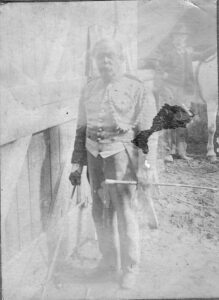 William (Billy) Jones (c.1842-1906), Aboriginal circus acrobat, was born near Dubbo, New South Wales, son of a labourer named William and Mary Ann, an Aboriginal woman. One of the first Aborigines to be employed in Australian circuses, Billy was noted as an infant performer in Henry Burton’s company at Bathurst as early as August 1851. A ‘manly little fellow of exquisite proportions’, he leaped on and off his cream-coloured pony ‘with pleasure in all directions; sometimes running by his side when at full speed, and vaulting with surprising nimbleness on his back’. Dubbed ‘Little Nugget’ and ‘Master Parello Frank’ (after a British African entertainer Pablo Fanque), Billy performed in John Jones’s equestrian troupe in John Malcolm’s circus in Sydney in May 1852. Jones taught him more acrobatic and equestrian acts, to dance a sailor’s hornpipe and to walk the tight rope.

Travelling the goldfields and the backblocks of south-eastern Australia, Billy spent his youth with Jones’s company, and adopted his mentor’s surname. In outback towns, he drew the attention of the public by ascending and descending a rope stretched from a tree stump to the centre pole of the circus. Visiting Hobart Town with W. H. Foley’s Californian Circus in 1866, he walked a rope stretched from the top of the circus pole to the Theatre Royal on the other side of Argyle Street, at a height of about fifty feet (15 m) to the cheers of people below. His marvellous versatility and agility remained undiminished despite advancing age and weight that reached as much as fifteen stone (95 kg). In 1873 with Bird & Taylor’s Great American Circus at Kapunda, South Australia, he somersaulted his ‘aldermanic corporation’ so rapidly it was ‘almost impossible to tell his head from his feet’. With St Leon’s Circus in Brisbane in 1882 he gave ‘a very neat display . . . with balls and knives with great rapidity, and without the slightest mistake’.

The last years of his circus career were spent with the FitzGerald brothers’ circus as a horse-trainer and ringmaster. He could still captivate audiences as late as 1896 with his leap over twenty horses. Dan FitzGerald wrote that Jones possessed the mind and energy to plan and execute the organization of a great circus. He knew every bit of harness and property, every strap and buckle, rope, seat and pole in the FitzGerald circus, and could train both its horses and its human performers in their various circus tricks. He possessed an ‘extensive and peculiar’ knowledge of Australia and its roads and an enormous store of anecdotes of Australian circus life. A ‘stout, dark man with curly black hair’, and ‘very smart’, he retired from his circus career in the early 1900s to become a coach-driver on the Mount Morgan road, Queensland. He was brought out of retirement in 1905 to appear one last time with FitzGeralds’ in Sydney as ‘Old William Jones’.

Jones had a son Frederick by his first wife Mary. In Sydney on 21 July 1893, describing himself as a widower, William Edwin Jones married with Congregational forms 21-year-old Maggie Long. They had no children. Jones spent the last months of his life as a watchman at Redfern. In straitened circumstances, he died of endocarditis on 4 July 1906 at Sydney Hospital. His wife and son survived him.

This article was first published in hardcopy in Australian Dictionary of Biography, Supplementary Volume, (MUP), 2005