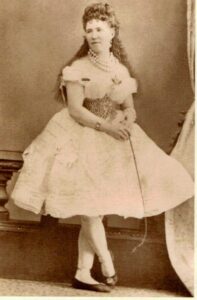 La Rosiere, Mdlle [pseud. Kendall, Jane (later Jennie)] (c.1841-1915) equestrienne and circus proprietress. Baptised with Wesleyan rites at Sherrington, Bucks, the daughter of Charles Kendall, a ‘sawyer’ and Elizabeth, nee Petts, Jane arrived in Sydney with her family as assisted immigrants in 1849 and settled at West Maitland, NSW. When, in 1850, John Jones [later known as Mathew St Leon] and Edward La Rosiere (pseud. Edward Hughes) (c.1824-1857) visited the locality with their equestrian troupe, Jane’s older sister, Ann, eloped with La Rosiere. By 1853, Jane had joined her sister as an apprentice equestrienne in La Rosiere’s Licensed Travelling Circus. Jane adopted the name of La Rosiere as her own circus nom d’arena. She would become known far and wide as Mdlle La Rosiere.

With Edward Hughes death at Ipswich [then NSW, now Qld] in 1857, La Rosiere’s Licensed Travelling Circus ceased to exist but Jane’s career as an intrepid equestrienne was by then established. In an age when female circus riders were few and their brief skirts were ‘wicked’, Jane’s equestrian talents soon found employment in other colonial circus companies. She joined the Australian Circus of Reuben Cousins (the nom d’arena of ‘the celebrated English clown’ John Plevy Bumpass), in Brisbane in September 1858. By year’s end Cousins and Jane were married with Anglican rites at All Saint’s Church, Bathurst. The couple visited India in 1861-2. With Henry Burton [q.v.] at Sandhurst in March 1865, Reuben was described as ‘…a very good clown of the heavy class but is exceedingly nimble for his weight … almost all his jests have the charm of being new….[i] Organising their own company, Cousins’ Oriental Circus was opened in Sydney on 3 July, 1865, visited Melbourne and then departed on an ambitious tour of South East Asia. ‘One of the most complete companies that ever visited the principalities’, the company disbanded when Reuben died of cholera in Java on on 22 May. The widowed Jenny returned to Australia with five young children and pregnant with a sixth. After giving birth, she rejoined Burton’s Circus. Jenny resurrected her colonial equestrian career as Mdlle La Rosiere. She was one of the few lady riders who could perform the difficult and demanding ‘bounding jockey’ act, an example of the voltige riding for so long exhibited at Astley’s and other equestrian establishments in London. At Deniliquin on 17 August, 1867, Jane married a Harry Coles, a ‘comedian’ with Burton’s, professionally known as Harry Cowle.

‘Very clever and graceful ‘, Mdlle La Rosiere was the ‘draw’ of Burton’s Circus as it toured the ports of North Queensland in 1869. Throughout the 1870s, Jenny was the premiere equestrienne of Burton’s troupe. She appeared in the circus ring alone, exhibiting a number of feats and poising herself in various attitudes to loud applause as her horse circled the ring at a smart canter. At the Grand Hippodrome in Adelaide in 1873, an exciting open-air contest between Burton’s National Circus and a rival company for the circus premiership of the colonies, Mdlle La Rosiere took the honours in a ‘splendid’ ladies’ chariot race despite a slight collision with her rival, Mdme Salavario. At Wagga Wagga in 1875, the horsemanship of Burton’s ‘first class’ company was described as ‘generally … very good, that of Madame La Rosiere meeting with special approval’.

In the Wickham Terrace Manse, Brisbane, on 10 June 1879 with Presbyterian rites, Jennie [sic], claiming the status of ‘widow’, married William Woodyear, the advance agent and later business manager of Burton’s Circus. Early in 1880, the Woodyears took over the insolvent Henry Burton’s circus. For several years, the Woodyears retained the prestigious name of ‘Burton’ to promote the circus but by 1884, with Jenny now retired from active circus riding, it was advertised as Madame Woodyear’s Electric Circus, so called because of its innovative use of electric lighting. In 1885, Woodyear’s Circus commenced a tour of the islands of the Pacific as far as Honolulu, the Far East, Southeast Asia and India. After returning briefly to Australia, the company visited Hong Kong in 1888 and Japan in 1889. At Calcutta, in December 1890, William Woodyear succumbed to cholera. ‘Clowns, athletes, trick riders, and ring men stood with tearful faces and bowed heads’ as his burial service was read. The Woodyear circus was disbanded and Jenny, now widowed a third time, finally retired from circus life for good. In Calcutta, she married John Gunn Harland-Taylor, an engineer. Jenny died at her home, 101 Raglan Street, Albert Park, in Melbourne on 1 January 1915 of cerebral failure and was buried the following day in Coburg Cemetery.

A ‘splendid and fearless rider’, a contemporary photograph of Jenny, riding crop in hand, reveals her robust yet petite disposition, and possibly a red or freckled disposition. Her diminutive decorative waist belt, passed down through several generations, evidences her slimness of figure. Of her twelve children, only two pursued careers in circus. Vernon Ida Cousins [1863–1935] married the equestrian Alfred St Leon [1859–1909], a son of Mathew. Their children were noted in American circus, vaudeville, theatre and film in the early 1900s. In 1912, Jack Cousins [1865-19?] who married a granddaughter of the famous American clown Dan Rice, was the equestrian director for the Frank A. Robbins Circus.