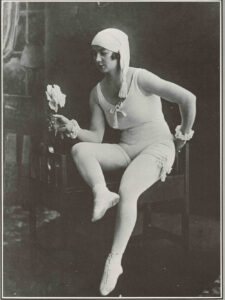 Mary Ann Josephine Lindsay (1892-1975), circus artiste, was born on 7 February 1892 at Wentworth, New South Wales, eldest of six children of native-born parents William Alfred Sole, circus bandsman, and his wife Eliza Jane, daughter of William George Perry, a circus performer known as ‘W. G. Eroni’. In 1890 the four Sole brothers had joined Eroni Bros Circus as bandsmen. The circus travelled by road: a glittering band-carriage led a procession of splendid Dallinger living-wagons, an extensive menagerie and as many as 135 horses.

Born ‘in the business’, Mary trained as a performer with her siblings and cousins. At 12 she was taught the trapeze by Charlie Harris who had been a ‘gear man’ for ‘the Flying Herberts’. She soon perfected her own balancing act on the high trapeze, and also became an accomplished wirewalker and acrobatic equestrienne. Meanwhile, she learned to read and write in the horse-tent with a slate and chalk.

As the Perry family grew in numbers and diverged in ambitions, the Eroni circus began to fragment. Mary went with Gus St Leon’s Circus in 1913-15. By late 1916 the Sole family was touring the northern rivers region of New South Wales as Sole Bros Circus under the direction of Bill Sole. On 4 February 1919 at St Mary’s Catholic Cathedral, Sydney, Mary married Albert Spencer Lindsay, an acrobat in the circus. Next year, after performing throughout Australia and New Zealand on the Fuller circuit, the Lindsays sailed for South Africa and thence for England. As ‘La Belle Marie’, Mary thrilled vaudeville audiences in London with her balancing trapeze act. When her father and uncle were killed by an explosion in June 1923, the Lindsays hurried home. Bert took over the management of the circus.

In 1926-29 Sole Bros Circus toured southern and central Africa; the troupe gave a special performance in the Congo for the King of the Belgians. Returning to Australia during the Depression, the circus re-established its name and reputation, and briefly combined with Ashton’s Circus in 1932. Mary ‘walked the wire . . . flew on the flying trapeze . . . walked up a pyramid of swords, was the queen of the Roman rings, and worked the horses’. She also sold tickets, organized finances, negotiated with councils for sites, oversaw the canvas-making and supervised transport by truck or train.

Mary and Bert retired to their home at Manly, Sydney, in 1964. They handed over direction of the circus to their daughter Jean and her husband Joseph Perry. After Bert died, at the age of 81 Mary took up residence in a caravan on the family’s 200-acre (80 ha) farm at Dunmore where she tended a range of animals. A slight but stocky woman, energetic and forthright, ‘Aunty’ Mary was widely known and respected by Australia’s circus and show people. She died on 17 April 1975 at Kiama and was buried in Frenchs Forest lawn cemetery; her daughter survived her.

This article was first published in hardcopy in Australian Dictionary of Biography, Volume 15, (MUP), 2000