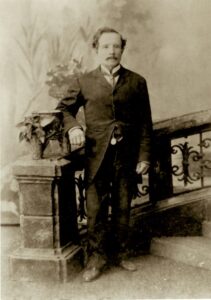 Matthew St Leon (1823-1903), acrobat, equestrian and circus proprietor, was born in the west of England, possibly at Bath, Somerset, and given the name John Connelly. He was the illegitimate son of a jockey, Patrick Connelly, and Ellen Catherine Ricketts, a first cousin, once removed, of Robert Banks Jenkinson, 2nd Lord Liverpool, prime minister of Great Britain. He was raised at Newmarket by the trainer, Henry Neale, and his family, and served as a stable boy in the royal stables where he learned the rudiments of horsemanship. He was twelve when sent to London, in advance of his father’s impending marriage to the daughter of a Newmarket trainer, to serve a spurious seven-year apprenticeship to a Westminster chimney sweep. His usefulness as a sweep’s climbing boy diminishing with adolescence, he adapted his agility to tumbling, and performed in London streets. At Astley’s Amphitheatre, across the Thames, he learned the circus arts. When implicated in a theft, he was tried (under the assumed name ‘John Jones’) at the Old Bailey on 24 October 1842. Transported to Van Diemen’s Land, he received a ticket-of-leave in July 1847.

Jones was one of ‘four wonderful acrobats’ in Australia’s first successful circus, opened by Robert Avis Radford, an expert horseman, at Launceston in December 1847. Here Jones polished his acrobatic skills and developed into a fine equestrian. At St George’s Church of England, Battery Point, Hobart, on 21 December 1848 he married Margaret Monaghan (c.1833-1897), an educated, Dublin-born woman. With an Irish ropewalker, Edward Hughes (known professionally as ‘Edward La Rosiere’), Jones opened the Royal Australian Equestrian Circus at Malcolm’s Adelphi Hotel, York Street, Sydney, on 15 October 1850. Joining Henry Burton the following year, Jones travelled to the Bathurst goldfields. At Sofala in September 1851 he formed his own circus, one of his performers being an Aboriginal boy, later known as William Jones. In the gold rushes, Jones’s National Circus travelled through south-eastern Australia. At Ballarat, diggers commandeered his tent for a meeting before the Eureka Stockade. By 1858 members of the Wirth family, German musicians, had become bandsmen with his circus.

At Barry Sullivan’s Theatre Royal, Melbourne, on 27 January 1865 Jones and his three young sons were billed as ‘The St Leon Troupe’, gymnasts from the Gymnase Imperiale, Paris. Jones subsequently took the professional name ‘Matthew St Leon’. Eventually the family retained that surname. St Leon’s Circus first appeared at Kilmore in May 1875 and grew rapidly in size and reputation; by 1883 its cavalcade of ‘150 men and horses’, brightly painted wagons, menagerie of wild animals and glittering band carriage extended over half a mile (0.8 km) in length. St Leon boasted more than £5000 in receipts from a Sydney summer season in 1883-84, when he was acclaimed as ‘one of the cleverest equestrians’ to have visited the city. In 1885-86 a second circus, headed by his sons Augustus (c.1851-1924) and Alfred (1859-1909), toured New Zealand. In 1889, after floods affected business, ‘Matthew Jones’ was declared insolvent and forced to liquidate his ‘splendidly appointed’ circus and land holdings in Melbourne.

Described as ‘a sterling character, straightforward and honest’, with bright eyes and a mild disposition, barely 5 ft (152 cm) tall, St Leon was an ‘exceedingly dapper little gentleman’. He enjoyed a cigarette but ‘never drank [or] swore’. At the height of his success, he had kept his wife and their two daughters ‘in plush’ in Melbourne, where the women were active in the Salvation Army. ‘John Leon Jones’ died on 14 April 1903 in his daughter’s home at Oakleigh and was buried in Springvale cemetery; the Wirth brothers’ circus band played a requiem at his graveside. Four sons and two daughters survived him.

Matthew St Leon’s sons and their children carried the name into vaudeville, theatre and film, as well as circus, in the twentieth century. With their families, Gus and Alf worked the circus and vaudeville circuits of the United States of America in the early 1900s. Another son Walter (c.1856-1943) and his family combined with Ashton’s circus in 1906-07. Soon after, Gus and his family, including the Honeys, returned to Australia to start the Great United Circus, which toured from 1909 until 1941. Gus’s son Philip (1890-1957), an equestrian, later joined the May Wirth troupe. Gus died on 16 October 1924 in hospital at Junee, New South Wales, and was buried in the Church of England section of Liverpool cemetery. Descendants of Gus and Walter were active in circus in Australia and the U.S.A. in the 1960s.

This article has been amended since its original publication.

This article was first published in hardcopy in Australian Dictionary of Biography, Supplementary Volume, (MUP), 2005