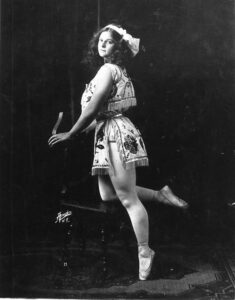 May Emmeline Wirth (1894-1978), circus rider, was born on 6 June 1894 at Bundaberg, Queensland, daughter of John Edward Zinga, a circus artist from Mauritius whose real name was Despoges, and his native-born second wife Dezeppo Marie, née Beaumont. After her parents separated, May was adopted in 1901 by Mary Elizabeth Victoria (‘Marizles’) Wirth (1868-1948), equestrienne and sister of Philip and George Wirth. Born on 7 December 1868 at Dalby, Queensland, Marizles had married John Augustin Martin (d.1907), circus musician, on 9 February 1891 at St Andrew’s Anglican Cathedral, Sydney. With their only daughter Stella (b.1892), they toured overseas with Wirth Brothers’ Circus in 1893-1900.

After starring in Sydney in April 1911, when she ‘rode and drove eight ponies, and turned somersaults on a cantering grey’, May visited the United States of America with her mother and sister. Engaged by John Ringling for two seasons to tour with his Barnum & Bailey circus, she was billed as ‘the world’s greatest bareback rider’ and given a conspicuous place on the programme at their opening show in New York on 21 March 1912. The elegantly gowned Marizles was ringmistress and Stella also performed. An immediate success, May developed her act by somersaulting backwards through rings and by leaping from the ground to the back of her galloping horse with her feet encased in baskets. Although seriously injured in a fall during a performance in April 1913, she appeared with Carl Hagenbeck’s Wonder Zoo and Circus at London’s Olympia next December. In 1914 Marizles, May and Stella appeared with two male riders in vaudeville in England and France.

As the ‘Royal Wirth Family’, the troupe toured Australasia with Wirth Bros Ltd Circus in 1915-16, performing vaudeville, burlesque and equestrian items. May was dainty, ‘like a butterfly in flight … alive, alert’ and delighted Sydney audiences. In 1917 the troupe toured North America with Ringling Brothers. As the ‘May Wirth Troupe’, they were joined by Philip Vincent Jones, known as St Leon, who later married Stella. May remained the star equestrienne when the Ringling Brothers and Barnum & Bailey circuses amalgamated in 1919. At the Church of the Transfiguration (‘The Little Church around the Corner’), New York, on 27 November that year, she married her manager Frank White who also adopted the professional name of Wirth; they were to remain childless.

May and her troupe toured with the Walter L. Main circus in the 1921 and 1923 seasons, performing in 1922 at the Coliseum, London; in the winter months they played in vaudeville in Europe. She again starred in Ringling Brothers and Barnum & Bailey combined shows in 1924, but left in 1927 to tour country fairs and indoor circuses. In the winter of 1931 her troupe was featured as the St Leon Indoor Circus and in March next year she performed the live circus scenes in the operetta, The Blue Mask, at Chicago.

Retiring at the peak of her career in 1937, May Wirth settled in New York; Marizles died there on 30 March 1948. May moved to Sarasota, Florida, where her name was added to the Circus Hall of Fame in 1964. A gracious, gentle woman, with ‘merry brown eyes’, she remained ‘sprightly’ and enjoyed sharing her circus memories. Predeceased by her husband, she died on 18 October 1978 at Sarasota and was cremated.

This article was first published in hardcopy in Australian Dictionary of Biography, Volume 12, (MUP), 1990