In April 1856, Goulburn was visited by Ashton’s Circus as it made its way to Burrowa, Camden, Penrith and the Windsor races. This was the same “Ashton” who had passed through the town in 1849 with his little troupe as they made their way from Port Phillip and Sydney. During his week-long stay in Goulburn, Ashton’s pavilion was crowded each night. Ashton’s ‘daring and graceful’ riding style was matched only by his physical strength. In one spectacle, he rode around his arena on a spirited, bare backed horse, without bridle, holding two little boys aloft, one of whom was the little Aboriginal boy, Little Nugget.

Ashton’s Aboriginal boy, Mongo Mongo, from the Peel River area, near Tamworth, ‘astonished the natives’ by leaping over bars and banners and through hoops in flames. One evening, numerous people gathered in Goulburn’s market square before the performance to witness Little Nugget perform his perilous ascent outside the circus:

A rope, four stranded, was attached to the ground, at a distance of about forty yards from the Hotel. It was made fast to the roof, the altitude of which is upwards of 60 feet from the ground. Owing to some difficulty in rectifying the preliminary arrangements, it was dark before Little Nugget commenced his extraordinary performance, but the torches belonging to the Goulburn Fire Brigade were lent upon for the occasion, and thus illuminated the spectacle. When the little fellow, attired in a dress of flesh colour, closely fitting to his slender frame, and carrying a white wand to balance himself, appeared upon the rope, the cheering from the multitude of people which thronged the market-square, was spontaneous and unanimous. The performance throughout was of an unprecedented description, and the Little Nugget, after passing backwards along the tight rope, descended from the accomplishment of his most famous feat amidst the tremendous cheering of the surrounding thousands.

In the century that spanned the gold rush era of the 1850s until the introduction of television in the 1950s, travelling shows catered for a wide range of audience tastes, employed thousands of people and contributed, directly and indirectly, to regional economic, social and cultural progress. These travelling companies of entertainers treated Australians to intermittent yet regular servings of contemporary culture – images, scenes, insights, melodies, songs, values, humour, thrills, courage, sounds and stories – that ameliorated the twin tyrannies of isolation and distance. As well as circuses, they included marionette shows, variety troupes, opera companies, lecturers, picture shows, boxing troupes, minstrel troupes, menageries, pseudo-scientists, brass bands, bellringers, buckjumping shows, concert parties, magic lantern shows, pseudo-scientific lecturers, electro-biologists, phrenologists, medicine men, snake charmers and so on. They ranged from the great to the mediocre, from the memorable to the deplorable. Whatever their standing, we are left to consider the service that this tremendous diversity of travelling shows performed in keeping Australians entertained and informed in an age less connected than what we enjoy today. Sometimes, they were the only break in the boredom, solitude and loneliness of the bush.

Most of our historians have been reluctant to appreciate, let alone explore, the contribution that travelling entertainers have made to the building and shaping of modern Australia, to Australia’s economic, social and cultural development. In Manning Clark’s landmark history of Australia, neither the word ‘circus’ nor the term ‘travelling show’ appears anywhere in its six volumes. Is it because they perceive itinerant entertainers as ephemeral to Australia’s story? Or is it because itinerant entertainers and the towns through which they passed fostered no more than a temporary familiarity with each other? Or is it because, since antiquity, itinerant people of any persuasion have been looked upon with suspicion by the settled population? Whatever the reason, I feel that the omission of itinerant entertainers from the national story is a continuing, material oversight. 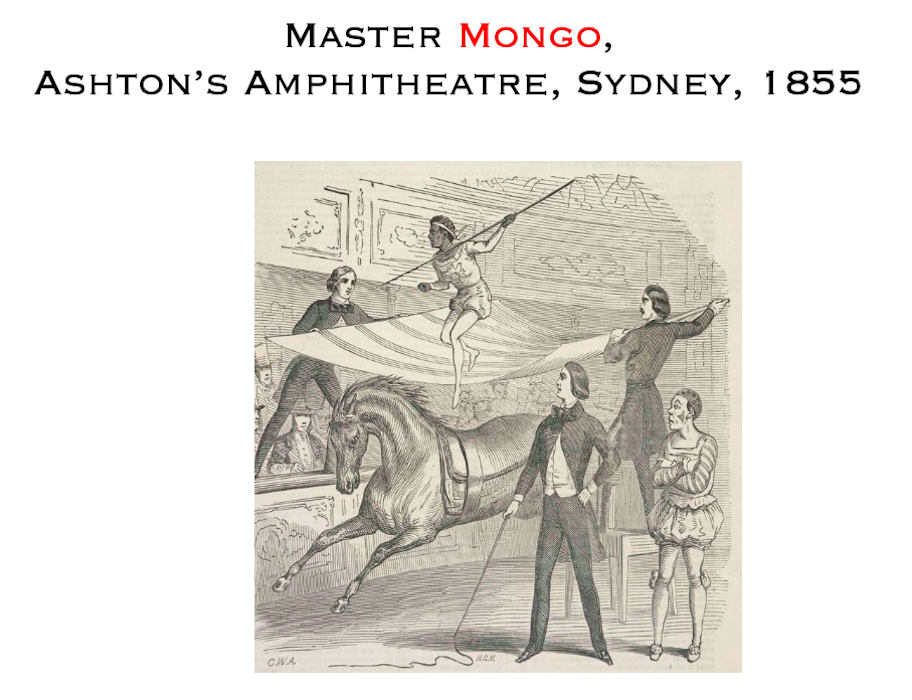